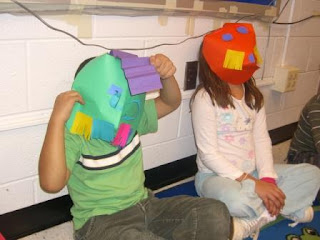 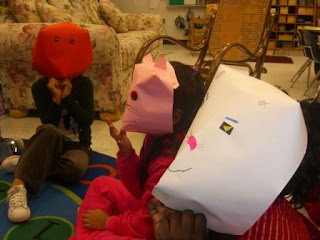 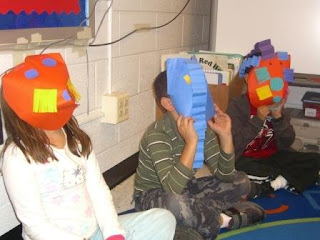 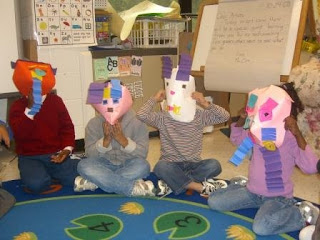 Eight years ago was my first opportunity to teach about a current presidential election. I was psyched! My fourth graders and I did a ton of research about the candidates and the idea of the election in general. We even set up to exit poll voters. Some of my students came in on the teacher workday and stood outside the school to ask voters about their choices. Our plan was to do some graphing with the results and compare to the state and country. However, the students arrived the next day and we still didn't know who the next president would be. We wouldn't know for a few more weeks. It was painful. I really had no idea how to explain the electoral college and the fiasco that was Florida to fourth graders.

Four years ago I taught an intersession class in October about the election. (We're on a modified calendar so we have optional breaks in October, January, and March/April. We offer really fun classes to students who choose to come.) I worked with fourth and fifth graders to learn about the candidates and about how campaigns and elections work. We researched the various positions on important issues, created campaign posters and buttons, and wrote campaign speeches. We then invited other classes to come in, learn from us, and vote. It was a blast.

This year I was nervous. I'm teaching first grade now and I had no idea what to expect when addressing the election. However, I was unwilling to ignore it. So, we read Duck for President and talked about the upcoming election. We used some basic resources for kids online to learn about the candidates. I had students write/draw the most important or interesting things they learned about John McCain and Barack Obama. 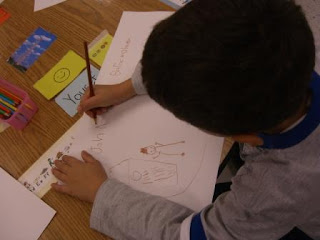 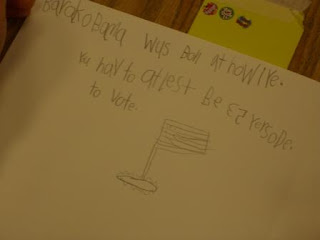 We created a VoiceThread with what we had learned. The other first grade classes watched our VoiceThread and then all of them voted. The results were overwhelmingly in favor of Barack Obama (but we think the fact that they learned he played basketball was a major factor). It was a really fun experience. 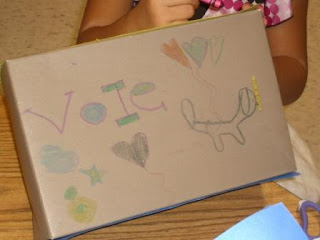 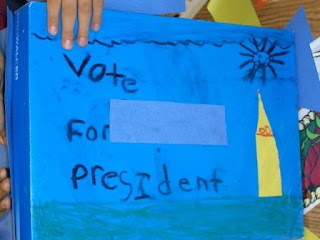 I did learn that first graders latch on to some odd things sometimes. One of the sites we looked at (I think it was Scholastic, but I'm not sure) had fun trivia bits about each candidate. It had their nicknames when they were kids. This is how we learned that Obama had played basketball. The site said that John McCain was called Punk or McNasty as a kid because he fought so much. I didn't spend a lot of time on this fact, but I did share it. It seemed innocent enough to me until one of my students asked me, "What was he called when he farted so much?"

Sadly, she was not the only one who had heard it that way. Many of my students asked similar questions over several days. Come to think of it, maybe that impacted the votes for Obama.
Posted by Jenny at 8:48 AM 1 comment:

In the upper grades (4th and 5th) I never stressed about how much play time my students had. Now I'm starting to wonder if I should have been more concerned. As a primary teacher now, and a parent of young daughters, I think that play time is critical. I'm amazed at how tight our days are in first grade, but I've managed to find some free time two or three days a week. It's our free choice time and it lasts about 20 to 30 minutes.

One of my goals for this time in our day was to have it as open ended as possible. My exposure to Gever Tulley and his Tinkering School has been a big factor in this thinking. 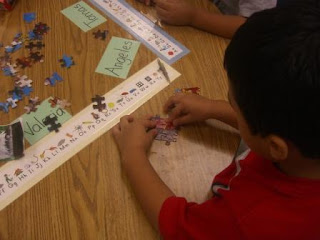 Puzzles are one of the first stations I offered the students. It's not as free thinking as I'd like it to be, but I think students gain a lot from working puzzles. 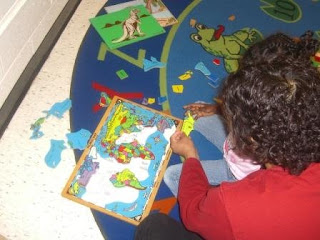 I also pulled out a small magnet kit I had bought for the upper grades and never used. I dumped the few pieces into a basket and offered it to the kids. They loved it. While I was in San Francisco in October I picked up a couple of other sets to add to this station. I've been amazed at what the kids have discovered with this. They held magnets below their chairs and used them to move magnets sitting on the chair. They've used magnets to move balls inside small strategy games to get the balls into the right location. They love this station. 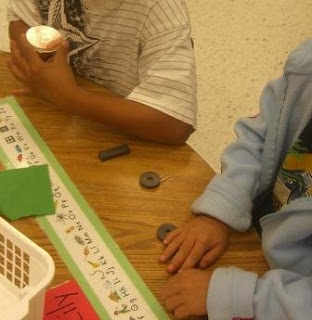 Somewhere along the line in my years of teaching I had picked up this set of letters. Again, it had never really been used in my upper grade classroom. It's also not nearly the challenge to their thinking that I would like it to be, but it was an option I had handy. 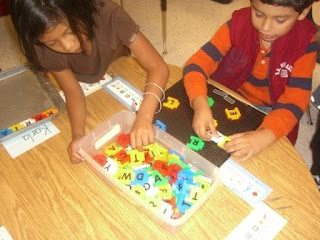 I also had these fun cards from some consignment sale or something. I am fascinated by the different ways the students build with them. Some of them work collaboratively and others work independently. I've taken numerous pictures of their creations because of the variety. 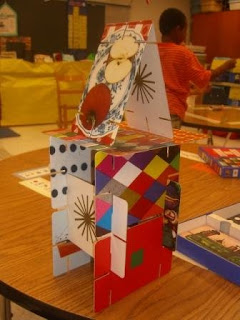 Recently I picked up a couple of new options. I can remember as a child visiting my great-grandmother and playing with marble runs. So when I found some cheap I grabbed them. The kids have identified this as another favorite choice and they have built some elaborate creations. 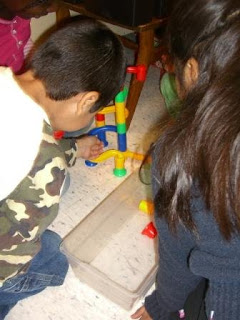 On that same trip to SF my girls and I played with foam blocks at two different museums. I loved them. On a rare trip to Toys R Us a few weeks later (a treat after surviving flu shots) I found a large container of these blocks. The kids seem to love them as much as I do. 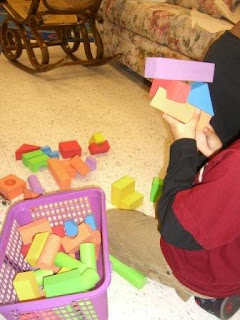 I've also offered them stations using puppets and one using dominoes. I'm still trying to think of other challenging choices. I need ideas that are reasonably priced and not too large. I'm open to any thoughts!
Posted by Jenny at 8:18 AM 6 comments:

Another way out of date post. Due to the various politically correct and religious issues surrounding Halloween, my school celebrates it as an SCA spirit day: Book Character Day. The kids can dress up as book characters which leaves them a lot of options. These days any movie or TV show worth its salt has books to go with it. As a result, we mostly see kids in store-bought costumes, which is just fine. Teachers however, have a great time with this day. I think the majority of these are very obvious, but just in case...
Ms. Frizzle 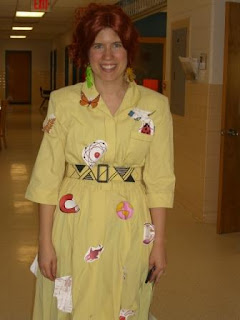 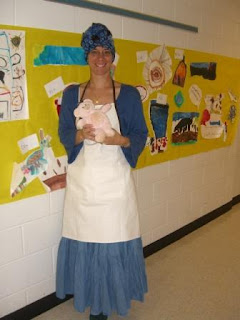 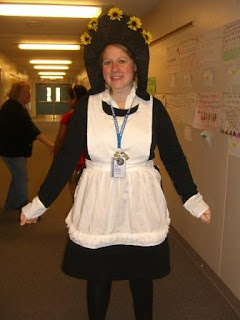 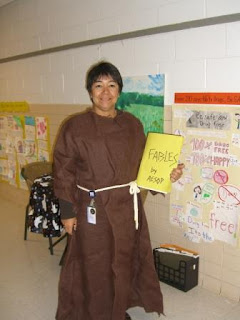 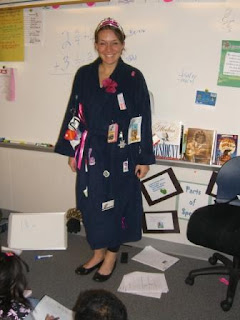 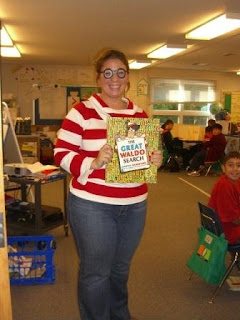 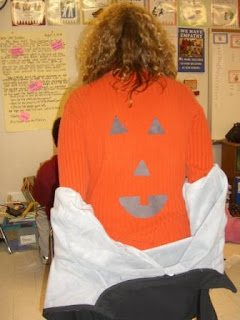 On Halloween, instead of doing our regular writing workshop, we wrote a book in the style of Eric Carle's Panda Bear, Panda Bear and other books. I had read about the idea somewhere, most likely on someone's blog, and thought it was brilliant. However, as usual, I didn't have it planned out carefully enough. We had read several of Carle's books over the past few weeks. We brainstormed a list of things one might see on Halloween. 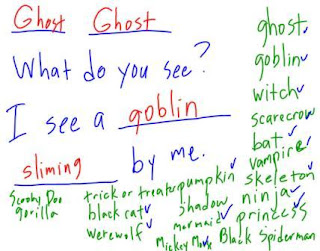 Then we let students choose the one they wanted to illustrate and told them what item they would be seeing. So, if they picked witch, they drew that and we told them the witch would see a scarecrow. Thank goodness there were three of us in the room! I could never have accomplished this alone (at least not with the lack of planning).

It was fun to see the pages they created. Some of them stuck with the basic bit, "Witch, witch what do you see? I see a scarecrow looking at me." 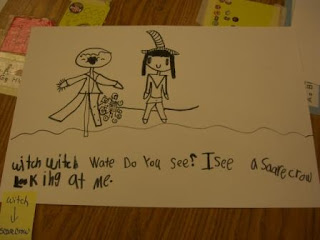 Others got more creative and added things, such as 'flying goblin' or 'whining at me'. 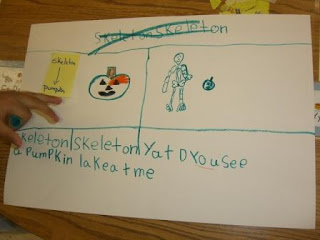 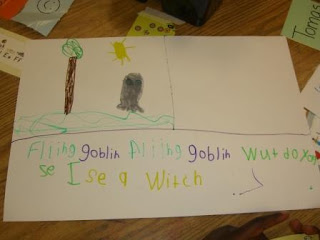 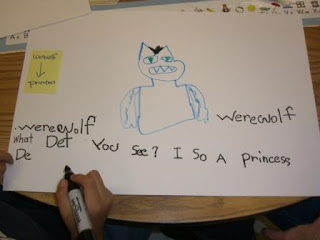 (I'm sure if I had written this post closer to this lesson, I would have had much more profound thoughts to share. Sadly, I've forgotten them all.)
Posted by Jenny at 8:42 AM No comments:

Another student has been weighing on my mind recently. I’ll call her Seesaw because she shifts up and down so frequently and so quickly. She does not really seem to have a middle ground. Sometimes she is on, really on. She is engaged, thoughtful, verbose, willing to take risks, and smiling. Other times she is withdrawn, sulky, defiant, and completely unwilling to participate.As an outside observer I think it would be fascinating to observe. As her teacher I find it painful.

For another student we’ve been doing a Functional Behavior Analysis (at least that’s what I think FBA stands for) and a Behavioral Intervention Plan (again, I think that’s a BIP). This is an in depth process by a committee (teachers, counselor, administrator, school psychologist, and school social worker for our committee). It has taken us about six hours to finish the process. We look at the child’s behaviors, the consequences of them, and what preceded the behaviors. This is done in the hopes of determining causes and/or results which could be modified or manipulated by the teachers in order to change the behavior. We’ve had a couple of outside observers come in to watch this student as well as our own thoughts and notes.

I’d love to have this happen for Seesaw. Maybe if we could pinpoint the consequences and antecedents of her change to the downside, we could find ways to help her remain on the upside more often. However, academically she’s doing just fine. There’s not really any way to justify the time and energy for so many people for this student. Instead, I’ll continue to feel frustrated and helpless regarding her.