The exhibit hall here at NECC defies description. It's in the basement of the Convention Center and runs under both buildings (essentially two blocks). I've been down there twice and accomplished nothing, partly because I'm just too overwhelmed.

However, the other reason I've accomplished nothing is because the great majority of the exhibits are a huge waste of time. Actually, that's an understatement. As an educator I'm offended by the existence of some of these companies. Their core beliefs are 180 degrees from mine. I spent a good five minutes listening to a young man explain one website to me (without blowing up at him because I don't truly blame him). The things he kept saying are clearly the 'selling points' for this product. Things like, "It's so bright and colorful and fun it keeps the kids from realizing they are learning." and "That's a fun little graphic that will keep them interested." God forbid we should make the actual learning interesting!

In addition to that frustration, I felt like the program was basically electronic worksheets. How is that 21st century learning?

It seems to me that so many of these companies are creating electronic worksheets or they are preparing kids for testing or they are trying to make school 'teacher-proof'. I'm not okay with any of those goals. Many companies have learned the right buzz words, but the reality doesn't match their sales talk.

The worst part is that they are clearly making lots of money this way. It makes me so sad (and angry, obviously).
Posted by Jenny at 5:24 PM 1 comment:

Not my sadness, my daughter's. Tomorrow is her last day of kindergarten. Her class has become a community like none I've seen before. Her teacher has been amazed by them. They were the ones that planned an entire wedding for their class bear.

This sadness keeps waking her up tonight. She's devastated by this ending. I want to honor that feeling, but I also want to help her become excited about the new things to come. How do we grieve for the past while simultaneously anticipating the future?
Posted by Jenny at 10:51 PM 1 comment:

My little prince will be moving this summer. So he will go on to second grade at another school. Today he said to me, "Can I bring you a picture so you'll remember me?"

I told him, "Of course you can bring me a picture. But, don't worry, I'm not going to forget you!"

I have to admit that it makes me unbelievable sad when kids move. I think it's even more true now that I teach first grade. It is so exciting to think of watching them grow for years to come. (I know we have a 30-40% mobility rate, but why does it have to be MY kids?)
Posted by Jenny at 3:25 PM No comments:

First thing this morning I tweeted: "Report cards are nearly finished. Doing them always reminds me of how much I hate assigning grades. I just don't believe in them."

This is a big pet peeve of mine. I have many issues with grades. I think they put the focus in the wrong place for students. I don't think they communicate anything informative to parents. In fact, the more time I spend thinking about them the more frustrated I get.

Fortunately my tweeps were there for me this morning.

This response made me laugh out loud: Give everyone A's you meanie

The next response was one of those reassuring reminders that I'm not alone: I feel the same way.& then parents ask what a 3 is equivalent to...grrr. We have done so much parent ed to get them to understand.

Finally another giggle: To not believe in assigning grades? That concept sounds vaguely un-American. :-)

Those responses made starting my day so much more of a positive experience. Thanks!

Last week I wrote about our plans for a garden. The students wrote a fabulous letter and copied it out four times so that I could take it to different places. I wanted it to be in first grade writing because I figured that would be more powerful. I also printed out a few pictures of the kids measuring the garden plot (and I typed a copy of the letter in case folks had trouble reading it).

Our third stop was a success! A nursery near us donated $60 worth of small, plastic, white fencing. It's just perfect for our needs. Today we wrote a thank you note to the woman at the nursery. The kids wrote it almost completely on their own - composing and actually writing. It says, "Thank you for the free fence. Now none of the kids will walk on our garden. You're super duper nice. We like the fence a lot." Perfect.

Today we went out and spent some time just digging in the dirt. 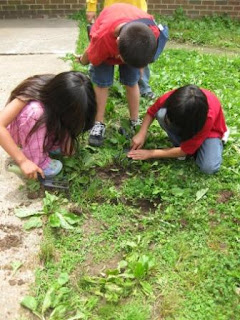 I gave each kid a small spade or cultivator. It was amazing! The kids were fascinated by the roots of the different weeds and grasses. We did study plants not too long ago. One boy kept running over to me with weed after weed saying, "You won't believe it! I found another root!"

We just started studying worms this week (nothing like starting a new science unit in the last week and a half). They found a ton of worms and were noticing the way they moved and their different parts. They also found other sorts of critters in the dirt. They found one I didn't recognize, but it looked sort of worm-like. One student noted that it couldn't be a worm because it had little legs. I couldn't have planned a lesson that would have been this fabulous. 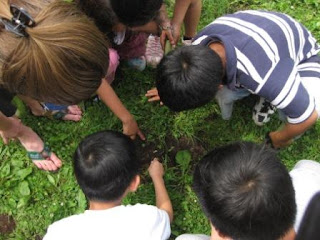 Our principal walked by at one point and proved, yet again, why I love her so. She cheered the students on in their work and when one student ran over with a worm she said, "That's my favorite worm! How did you know?"

We won't get much of a garden planted in the few days that are left, but we'll get it started. I'm quite certain that next year's class (and the years' to come) will have a lot of work, learning, and fun in this small corner of our school.
Posted by Jenny at 2:23 PM No comments: 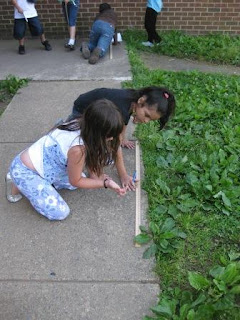 With only a week and a half left in the school year I've decided to try to plant a garden with my first graders. It's not a brilliant idea by any means, but once I had mentioned it to them there was no going back. 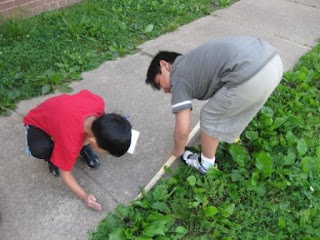 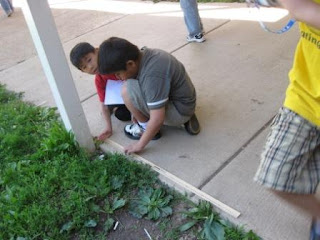 Our principal has given us a plot of land between the cafeteria and the playground. Students often run across it in their haste to get to recess. So we want to plant there and put up a small fence to discourage such behavior. 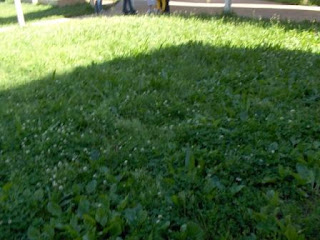 We went out one day and measured the area so that we would know how much fence we needed. We then wrote letters to local nurseries and hardware stores asking for a donation. I'll be taking the letters (and some pictures) around this weekend. I hope we get a bite!
Posted by Jenny at 10:10 AM 1 comment:

We've done it. We've ordered a netbook. I've been mulling this over all year but I haven't had the guts to pull the trigger. My husband finally took that step for me. It should arrive tomorrow.

My goal is to use this netbook for all my anecdotal record keeping. I'd like to keep these records in google docs that could also be used by my amazing co-teacher. Sadly, I'm really bad at being able to plan well for something ahead of time. I tend to have to modify again and again in the midst of everything (hence my classroom being rearranged almost a dozen times this year).

I want these records to be easy to use both as we input information and as we come back to them. I'm pretty good about keeping anecdotal records on my students but I am awful at using them to plan future instruction. I want to solve that problem. My hope is that google docs will make it so that I can sort and search in order to form small groups for enrichment or remediation.

Do you know of anyone who has done something like this? Do you have any advice for how to organize it? Can you think of any pitfalls we should be planning to avoid?
Posted by Jenny at 9:44 PM 2 comments:

We got our class pictures today. I wrote briefly about the experience of taking the picture a while back. I've been waiting and anticipating since them, wanting to see the results of such an event.

Now that I've seen it I've shown it to everybody I can find. It makes my day.

At first glance it looks like a perfectly normal first grade class picture. The students are mostly smiling and in their spots. But when you take a moment to look more closely you will find a fascinating little boy completely backwards to the camera. All you see is the back of his head.

I have eleven years worth of class pictures. This is, by far, my favorite.
Posted by Jenny at 11:05 AM No comments:

What is use number 3?

Since I moved to first grade I've had to adjust to a bathroom in my classroom. It's convenient, but takes up a lot of space. (So far I've managed to avoid any horrific experiences with it. I'm sure they'll start tomorrow now that I've said this.) The bathroom is about 2 1/2 feet by 5 feet. This year it has simply been a bathroom. I want it to be more.

Any advice on how I can use that space? Hang things on the wall? If so, what sort of things? Other thoughts? I'm looking for ideas that are totally off the wall!
Posted by Jenny at 10:29 PM 7 comments: