In addition to updating our teachers' lounge, a couple of us worked on organizing the school's math resources while our student teachers did their independent teaching time. For the past few years those resources have been in a trailer along with the office space for our math specialists, meaning they were rarely used. Our principal has been trying to find a way to get the office for the math teachers into the building so that they are in the midst rather than removed. She found a small space for them so we moved the materials to our AV room off the library. In the process we did a few really smart things (thanks to the brilliance of various people): 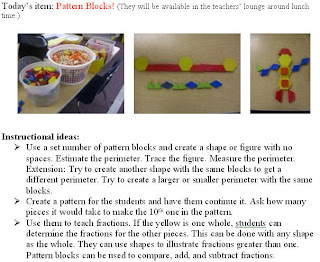 This is all very new for us, so it remains to be seen how well it will work. We have high hopes however.
Posted by Jenny at 8:53 AM 1 comment:

Bragging on my school

Family from Spain are visiting for a couple of weeks. Chatting with my uncle and cousin I found myself answering many questions about my school. They were curious about the diversity and how I felt about it. Having taught here for ten years, it is clear that I think it's wonderful or I would have moved on.

However, my uncle always wants to dig a little deeper. He asked if I would prefer that my daughters go to a school this diverse or a more typical elementary school. I told him that my oldest would be starting kindergarten at my school in a couple of months. They both seemed impressed by this. My uncle then asked what I would do if I won a million dollars. Would I still send her to my school? Without hesitation I said yes. They were floored.

Later I recounted this conversation to my husband, wondering if he would think I was crazy. He didn't bat an eye. He completely agreed with me.

I am frequently amazed at how lucky I am to teach here. As a colleague/friend said, "My job adds to my quality of life."
Posted by Jenny at 9:27 AM 5 comments:

Wading into the Ocean 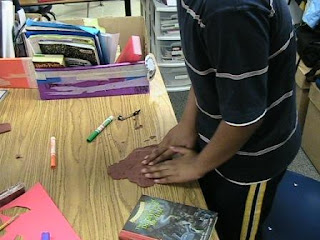 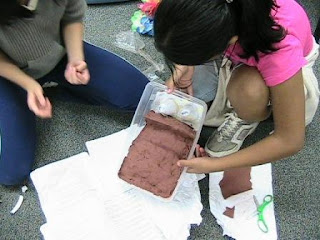 Building models of the ocean floor. 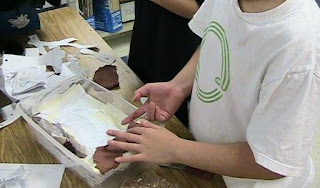 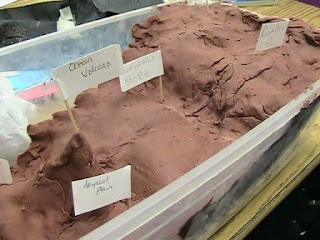 This weekend our Girls on the Run team ran the final 5K of the year. I ran as a buddy with one of my current students. Buddy runners are along to encourage and push the girls during the race. Looking back and reflecting on the race I realized that my buddy did great when I set goals she could see and felt she could achieve. Telling her that we would stop and walk when we got to the halfway mark did not do much to motivate her, even if the halfway mark was only a short distance away. She couldn't see anything significant marking that point so she couldn't really tell how much farther it would be. However, if I said we could walk once we got to the bottom of the hill, she kept up a good, steady pace down the hill. At the very end, when we came around the corner and could see the finish line she full out sprinted. It was impressive.

This got me thinking about teaching (of course). Right now we are working on a huge, end of the year, social studies and technology project. I'm really excited about it and as a result, so are the students. I've worked hard in my thinking to be sure I can see the big picture and the final goal. It's important that I can see this. But I don't know that they need to at this point. I think that one of my jobs is to set smaller, achievable goals for them throughout the project. The project, as I see it, is massive. It involves a lot of research, plenty of synthesizing what they learn, some tough decision making about technology tools to use, and serious work with those tools. I've set it up for them in those four parts, and we're currently working on the first and second. However, I'm thinking it needed to be broken down even more, at least for some students. The massive amount of research they are doing intimidates some and they want to give up. They can't see an end in sight so it doesn't feel worth the effort.

Anytime something is new and difficult, one needs to see success fairly regularly. A project of this scale is not something these students have done before. I've got to help them set a pace they can continue, hopefully with a burst of energy at the end.
Posted by Jenny at 8:00 AM No comments:

It's state standardized test time at my school. It's kicks off tomorrow and will run for at least the next three weeks. Longer if we have a lot of make ups. As you can imagine, that means the past week, few weeks, month, whatever have been test prep time.

I refuse to do a lot of prep. Either I've taught these students well and prepared them as we've gone along, or it's too late to worry over it now. However, tests are their own genre of text and students need to know how to approach them. So, I've spent a bit of time working with them in the last week.

Tomorrow we take the math test, so that has been our focus. We've explored it by strand. For example, one day we looked at released questions from last year in the measurement and geometry section. I put each question up on the smartboard with the answers covered. I don't want their attention to be on which answer is correct. We sorted those twelve questions in a couple of different ways. First we determined if each question was focused on measurement or geometry. Then we tried to analyze it a bit more deeply. We found some area and perimeter questions, some questions about two-dimensional and three-dimensional shapes. We found a couple of questions that could need protractors. I just wanted the students to see the different sort of topics they would find on the test and recognize how much they already know about those topics.

The next day I pulled small groups based on who found each question challenging and we brainstormed strategies for answering that sort of question. Sometimes I pulled the entire class because they all seemed to feel somewhat uncomfortable with the question, but that was rare. Typically I would have three or four students looking at a question. Some concepts (especially fractions and decimals) give more kids trouble and I might have nine or ten gathered to talk about it. Today I made sure there was a little bit of time for students to bring any final concerns to me after we had discussed the final bits. I had four students with some different areas in which they still did not feel completely confident.

This way our test prep is differentiated. When they weren't meeting in small groups with me they were playing math games. Some kids would come up for questions they didn't mark as challenging because they just wanted to double check their thinking. I don't think I overloaded them or made them more stressed about the test. Hopefully, our time on this increased their confidence and answered some last minute questions they may not even have realized they had.

I don't expect them all to earn perfect scores on tomorrow's test. I do expect that they walk in feeling comfortable with the questions they will see and feeling capable of doing their best. What more could I possibly ask?
Posted by Jenny at 8:57 AM 3 comments:

Failure, according to fifth graders

My students spent nearly twenty minutes this morning debating the meaning of failure. They were discussing a quote from Michael Eisner, "Failure is good as long as it doesn't become a habit." (For homework each week they write their thoughts about a couple of quotes I give them and we discuss them on Friday mornings.)

They started off debating whether or not they agreed with the quote. Pretty quickly a couple of students realized that the reason they disagreed was because they viewed failure differently. From there it became a discussion of the meaning of failure. Some feel that failure is an end and there is nowhere to go. Others feel that failure can be a bump in the road from which one can recover. They debated the differences between mistakes and failure. One student went to get a dictionary to compare definitions of the two words. That led to a brief side debate about the usefulness and/or accuracy of dictionaries.

After about twenty minutes three or four kids were beginning to look dazed and checked out. So, I stopped them, to great protests, to move on and discuss our next quote. I did promise that if anyone wanted to continue the discussion later I would make sure they had an opportunity. I also tried to make them understand that it was wonderful that they didn't all agree. We couldn't have had such an interesting discussion if they all felt the same way.

I was so impressed with how well they listened to one another, built on or argued against each others' ideas, and really thought seriously about the topic. I will admit that by the end I was beginning to feel a bit dazed, but mostly I was wishing I had recorded the discussion.
Posted by Jenny at 2:00 PM 4 comments:

Layers of the Earth (through cake) 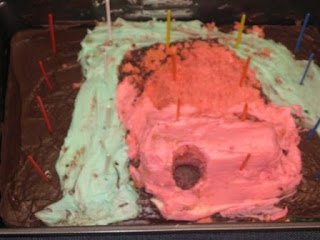 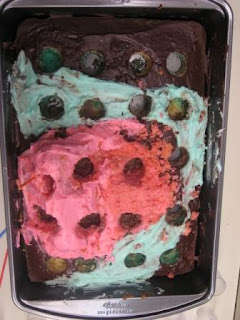 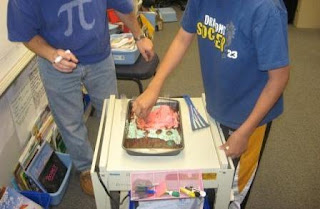 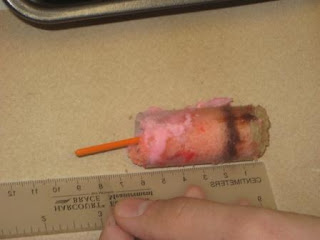 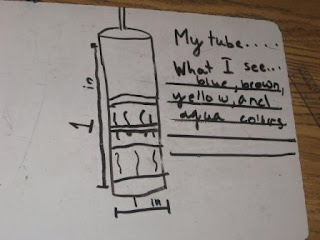 A multilayer cake was cored for samples to measure and study the various layers of the cake. Many, many thanks to the science fellow working with our school (in the pi shirt).
Posted by Jenny at 2:13 PM 3 comments:

I, along with five other teachers, have been out of the classroom for four weeks while interns completed their independent teaching. We've had a lot of freedom to work on projects of our own interests around the school during this time. One thing we decided was important to us was making our teachers' lounge more comfortable and a better place for relaxing.

We didn't do much (not a lot of money available). We got a couple of couches off of freecycle, tables donated from teachers, some plants (fake, because really, who would take care of them), new curtains and fabric for the bulletin board, and paint. Our principal found money for the paint, fabric, and some plants. It's not a luxury lounge by any means, but it is an improvement. 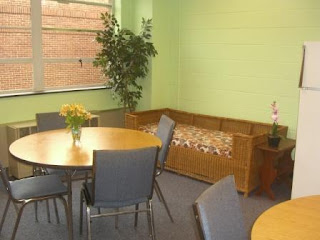 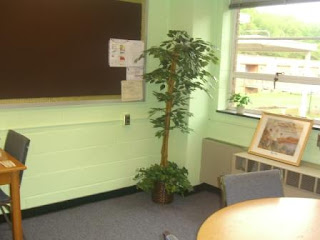 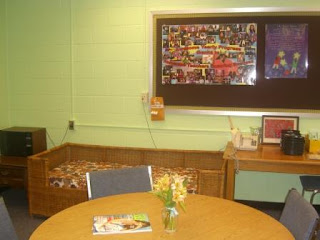 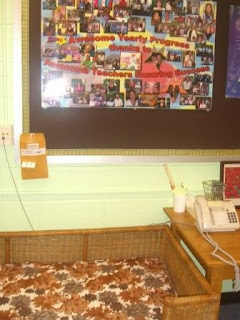 We also painted the two bathrooms attached to our lounge. We had chosen three possible colors for the lounge and painted quick swatches on the walls so that teachers could vote on their choice. We used the rest of the two losing paints for the bathrooms so that we did not waste any paint. (The colors look shockingly similar in these pictures, but there is a wide range of greens here.) 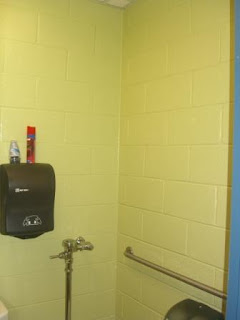 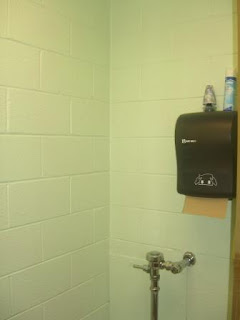