I spent the past three days in Salt Lake City thanks to The Bill and Melinda Gates Foundation. I have so much to think about as a result (both from the conference and from all the amazing teachers there) but first I've got a question.
I teach in Virginia, one of only two states (I believe) that did not adopt the Common Core State Standards. As a result, I have to admit to having paid scant attention to them. I have, however, paid more attention to the reception of the CCSS in the media and from teachers, at least those on Twitter or Facebook. I've seen positive and negative reactions.
So, if you've taught the CCSS, what do you think? And, even more importantly, why do you think that?

It seems wrong to ask a question and then require that you go to another site to leave a comment, but I am trying to keep all the comments on the new site. Sorry! And thanks! So, head over to jenorr.com to share your thoughts.
Posted by Jenny at 8:48 PM

As a first grade teacher I hate being away from my classroom. I have worked hard to build community and to establish routines and every absence feels as though it makes a dent in those, sometimes a significant one. But I'm a mother which means there are times I must miss to stay home with a sick daughter. I'm a wife which means I'll miss a day soon to be there when my husband receives a teaching award. I'm a professional which means I miss days to attend and present at conferences. If I could just get my twenty little darlings to stay home on those days I would do it!
Every year I struggle with how my students behave when I am not there. They are not the class they are with me. To some extent I expect that. But it also frustrates me because I take it as a sign that our classroom community is not strong enough to withstand my absence. It suggests to me that my students are only being so fabulous because I am there.
Andrew Campbell has me rethinking this concern. In a post about listening to teachers' expertise, he writes about what happens in his classroom when he is out.

We see it when a class transforms from a pleasant helpful group of students to a horrible, nasty mob simply because a supply teacher arrives. It happens when I merely walk to the back of my classroom so a student teacher can present a lesson. These other teachers aren’t me and aren’t connected with the class the way I am.

It had never occurred to me that my students were fabulous with me because of the connections and relationships between us. (Head slap.) Without those, the community is not as strong.
Andrew goes on to write:

This doesn’t happen by magic. I spend many days planting the seeds of these connections, and every day thereafter cultivating and maintaining them. I love the term “classroom culture” because my science nerd brain immediately thinks of the kind of the culture found in a lab to grow cells. It’s a useful metaphor, because like growing cells, the “complex web of connections” is organic and it grows and develops as the school year progresses. And just like a cell culture if it isn’t maintained under the right conditions it dies.

I too work really hard to plant these seeds. I greet my students one by one at the door every morning, with a smile and a handshake or a hug. I want to start our day connecting. Once a week I eat lunch with several students so we have some relaxed time to spend together. I try to listen when they share things with me, and first graders have a lot to share! When I can I go to their soccer games or drama performances or other outside events. I firmly believe those relationships make a difference in how well I can teach them and how much they will learn. (Our new superintendent seems to share the belief that this is important.)
I'm not completely sold on this but it's got me thinking. One of my concerns with Andrew's thoughts here is that it gives me more power and focus in the classroom than I really want to have. I'd love for my students to have a community that is so strong that someone's absence, including mine, is not critical. The difficulty there is that my absence isn't just an absence, it means an unrelated person enters the mix. I wonder what the day would be like if the special education teacher who also teaches in my room was the one with them in my absence. Would the connections and relationships she has with them mean a day much like any other?
I've got several absences coming up. Andrew's post has me thinking differently about how to prepare for those absences and how to respond upon my return. Before I leave we usually talk about why I'll be out and doing our best. Maybe we need to talk specifically about our community and how it will feel to have a stranger in it. Typically I have shared my disappointment with some things when I am back with the kids. I don't believe this is likely to help our community. Maybe we should talk about why it happened instead.
Clearly I'm not settled in my thinking yet. Maybe I won't ever be. But I've got three conferences in the next six weeks so I'll have some great opportunities to test out some new ideas.
Bud Hunt was also thinking about community recently. Clearly it matters. I appreciate all these folks giving me new perspectives and thoughts. 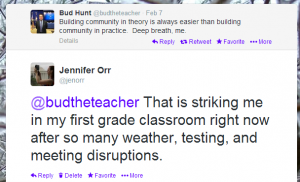 Cross-posted from jenorr.com.
Posted by Jenny at 8:31 AM

This school year, however, one bias is glaring me in the face. I have two kiddos whose mothers are only peripherally in their lives. (I don't know either of these mothers so what I know about them is second hand. Based on that, it's quite possible these kiddos are better off without their mothers closely involved in their lives.)

Out of my twenty students, I know that three of my students (maybe five, I'm not certain) have fathers who are, at best, peripherally involved in their lives.

I don't feel the same way about those fathers. I barely think about them. When I do, I'm disappointed in them. But that's about it.

Why is this? Is it because I'm a mother so I identify with the mothers more than the fathers? Is it because it's more common for fathers in our society to be absent from their children's lives? Is there something else I'm missing?

Cross-posted at jenorr.com.
Posted by Jenny at 9:00 PM No comments:

For the 5th year, I did an Educon Encienda presentation. These are Ignite-style presentations, 20 slides that auto-advance every 15 seconds. This makes for an exactly five minute presentation. It's a bit nerve wracking, but, for whatever reason, I really enjoy doing them.

My part in this video comes in at about the 30 minute mark (and lasts, shockingly, five minutes!), It's tough to hear the first part but becomes more clear about 30 seconds in.

Cross-posted from jenorr.com.
Posted by Jenny at 6:03 AM

This afternoon I was working on progress reports and found myself wondering how much each student's gender and ethnicity played into the grades I was entering. How much were those factors impacting my perception of their growth in reading or math or science? Were boys in my class earning lower grades in organizational skills or self-control than the girls because of gender? Were African-American and African students earning lower grades in reading because of their race? I hope not, but I'm certain those factors play a part no matter how hard I try not to let them.
This is fresh on my mind because of a session at Educon led by Audrey Watters and Jose Vilson. Both are educators I was familiar with and respected greatly before this conference. That has only increased after this session and the opportunity to speak with them some. I have to say how impressed I was with both Audrey and Jose for their ability to allow this to truly be a conversation. They introduced themselves and the topic and then let us run with it. (They later shared that they really hadn't planned anything. So what? They didn't dominate the conversation at all, in spite of, I'm sure, having plenty to say on the topic.)
The conversation roamed extensively and covered a lot of fascinating ground. By the end, my head was swimming. I'm left looking back at my tweets from that period to remember what I was thinking (I, like many others, take notes by tweeting at conferences).
One of my thoughts mirrors that of my thinking today as I worked on progress reports. As a white, heterosexual, middle-class woman, I worry about how I sound to those who have less privilege. I can only, truly know my own experience in life and that is limiting. That is true of all of us, but as one with significant privilege, I worry that it means my biases alienate others without my ever realizing. As a result, I'm grateful to those who point out to me when I am biased or showing some ism that I may have missed. It takes courage to do so, but it's tough for me to grow without that perspective and help.
This led to some thinking about the collective responsibility we share here. Those with privilege are responsible for being thoughtful and for reflecting on their own biases and changing, or at a minimum attempting to do so. Those with less privilege bear some responsibility to help those with privilege see through their lenses. That seems unfair in many ways, but I can't figure out how else we make change happen. Everyone, regardless of privilege, has the responsibility to be thoughtful and respectful.
I've taught my entire career in a Title I school. The great majority of the students and families with whom I work lack privilege. I'd be hard pressed to name one area in which they have privilege. As a result, I find myself struggling to remember how much they know and have to offer me. It's easy for me to see myself as the expert about education and children and ignore all that I can learn from them (including about education and children). Luckily, I have at least one fabulous friend who reminds me of this regularly.
During the session we discussed how teachers often feel marginalized in their profession as we are rarely excluded from decision making or serious discussions of any sort. But we do the same thing to families regularly. That really hurt to realize.
Mike Thayer hit on this same idea when he tweeted:

As he noted, these questions are important. They're also seriously hard to answer. They're even, often, hard to discuss. That said, at Educon we spend an hour and a half discussing them. And doing so with strong emotions and great respect.
Others have written about this session far better than I could ever do.
Audrey Watters shared a brief reflection and a collection of tweets.
Rafranz Davis wrote about the entire conference, but with a thoughtful paragraph about this session in particular.
Sabrina Stevens shared a collection (from some time back) of resources on this topic. Impressive.

Cross-posted from jenorr.com.
Posted by Jenny at 8:37 PM No comments: