I heard that phrase a lot as a student. I'm sure my parents heard it about me quite a bit as well. Frequently I was 'not meeting my potential.'

This isn't about my students. It would be easy to blame them, blame spring fever, blame not enough outdoor recess, blame blah, blah, blah. It's not about them. They are delightful. They are bright. They are funny. They are excited to be at school.

Sadly, this is about me.

I know there are many factors affecting me right now; worries about some things at home, Testing Affective Disorder, stress about all that must happen as the year wraps up, frustration about things at school.

Knowing those factors isn't enough. For at least the past week I have listened to myself and been pained at what I heard. I knew as I was talking to my students that what I was doing was unfair to them and not what I believe in. In spite of that I couldn't or wouldn't make a change.

I don't have a solution. I will work extra hard starting tomorrow to meet my potential.
Posted by Jenny at 8:50 PM 4 comments:

Actually making use of all the pictures my students took on our field trip to the Tidal Basin is a challenge for me. Just taking the pictures could be enough - that is worth doing no matter what.

But I do like to do more with them. So we told the story of our field trip from beginning to end. Well, from the time we got off the bus until we got back on the bus because that was the time frame during which they had cameras.

The only guidance I gave them on this was to ensure that we talked about the right memorial to match the picture. Otherwise it was up to them.

Then they made their own. Most are still working on them but some have finished. I didn't do anything with these. These were done independently. The mics on some of our machines are not too great but we made do. These range in length from 25 seconds to more than 3 minutes.

On Sunday morning I got up much too early for that day of the week (although it's getting to be a season when that happens some). I left my house by 6:15 in order to join others from my school for our local Girls on the Run 5K race.

One of my former students (the little darling on the left in the picture below) asked that I be her buddy runner. I couldn't say no.

It took me more than two hours to get to the race location, due to the insane number of people going there. (The bus driver taking most of the folks from my school is rumored to have said, "The power of women can stop the world...and 66.) The race was delayed more than half an hour in order to allow people to arrive. (That was lucky for me because I got there about 10 minutes after the scheduled start.) 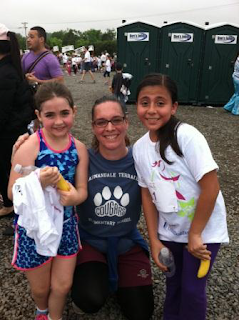 Unfortunately, the little one on the right was left without a buddy runner as her's did not arrive in time. She joined us and thank goodness she did! She's a fabulous runner and kept us moving. I don't know her well but she is in Girl Scouts with my daughter so I am familiar with her.

She's about as sweet as possible and pretty quiet. I'm sure my original buddy and I were holding her back through most of the race but she just kept turning back to us, smiling, and waving her hand to tell us to 'come on!'. I wish I had a picture of that.

Seeing kids outside of school is always a joy. Sometimes you see an entirely new side of them. Other times, as was true with these two, they are just the way you would expect, if possibly a little more relaxed and loose. I never regret the time I spend with kids in different settings.
Posted by Jenny at 9:25 PM 1 comment:

This week I've felt quite down and weepy. One morning I was walking down the hallway to my classroom before school and I felt close to tears. I could not identify a reason. And I tend to analyze those types of things to death.

I've known folks who suffer from Seasonal Affective Disorder (SAD - such a great acronym). Personally, it hasn't been an issue for me, for which I'm grateful during some of our dreary winter days.

Then it hit me. I suffer from Testing Affective Disorder (TAD). I know this isn't in the DSMV but if we're not careful it will make it into a future edition.


Those sound absurd and mostly they are. But the more I think about it the more convinced I am that the testing season truly does affect many of us significantly.

As a teacher and a parent it hurts me to hear that a few of our fifth graders, who began their reading test at 9:00 am didn't finish it until nearly 5:00 pm. I'm on edge watching so many of my former students as they face these tests. I am pained as I watch teachers try to balance pushing their students to do their very best on the test without making them overly anxious. A really tough line.

I've written before about my frustrations with testing, but the more it happens, the more concerned I get. Testing Affective Disorder is clearly satire. At least, I think it is.
Posted by Jenny at 6:01 PM 1 comment:

I am blessed with two (mostly) healthy daughters who make me proud, make me laugh, make my life better. Every single day.

For me, Mothers' Day is a delight. I spend it with my daughters, enjoying the homemade gifts they so eagerly bring me. If I'm lucky I also get to spend it with my mother or my amazing mother-in-law.

This year, however, I am struck by the complications surrounding Mothers' Day. Not everyone is as lucky as I, unfortunately.

I think of all the women who would like to be mothers and are not, for whatever reason.

I think of a good friend, a mature, wise adult who lost her mother a couple of years ago.

I think of a little girl I know who lives with an aunt and uncle because her mother can not care for her.

I think of a little boy I know whose mother died a couple of years ago.

Is this day anything more than painful for them? Is it anything but salt in an already painful wound? Are there not better ways to celebrate mothers and all the other amazing people who care for us? 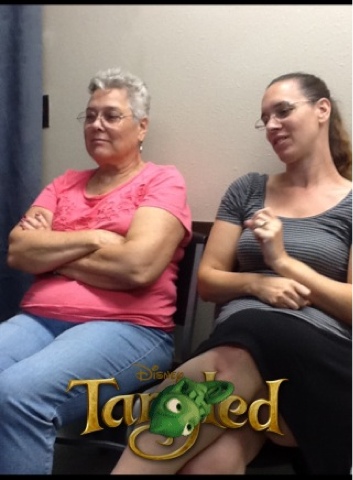 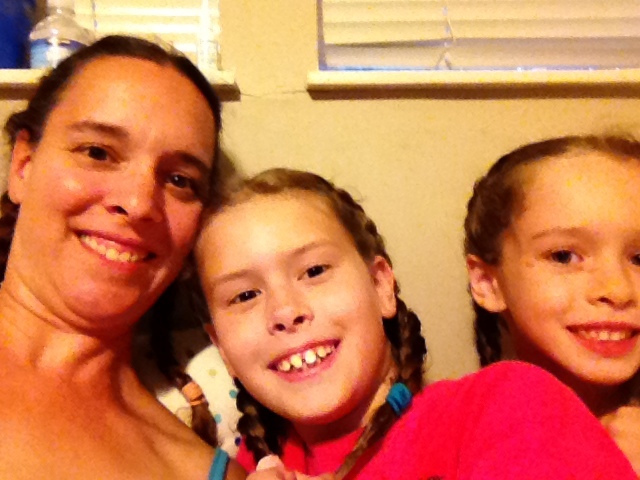 Last week our first graders went on a field trip to the Tidal Basin in Washington, D.C. My class started at the Jefferson Memorial, walked a long way to the Martin Luther King, Jr. Memorial, had lunch, and headed on to the Franklin Delano Roosevelt Memorial. After much time there we headed on around to see the George Mason Memorial, then back to the Jefferson to meet the bus. (As it turns out it's only 1.8 miles but it felt like double that.)

My kids had cameras - about one per every two kids, some regular digital cameras and others flips. It wasn't organized, I just gave them to kids and then they passed them around as we traveled.

I've been through their pictures about five times so far (I haven't tackled the videos yet because they intimidate me). The pictures include plenty that are exactly what you would expect - stereotypical shots of the monuments, goofy pictures of each other, lots of pictures of water (the Tidal Basin, the fountains), and ducks.

There's lots of other stuff too though. Here are a few of my personal favorites. 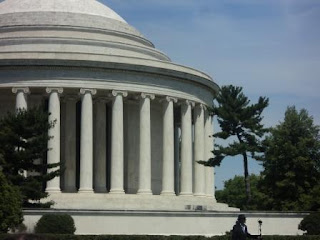 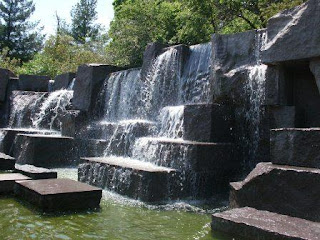 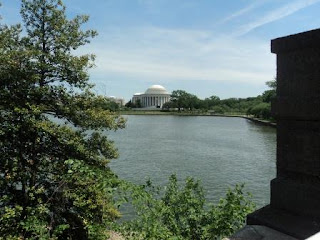 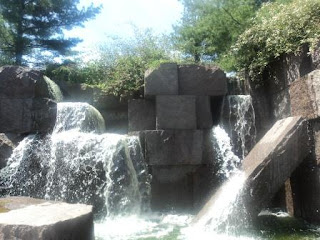 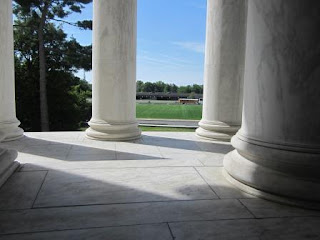 One darling girl seems to have spent the majority of the trip posing for photos. Here are just a few. 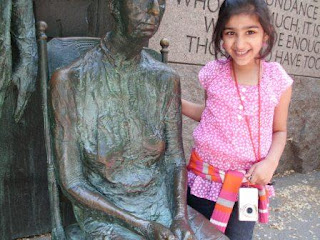 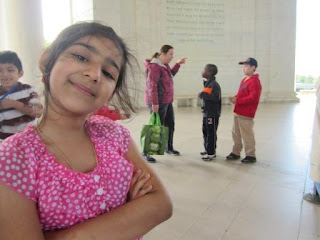 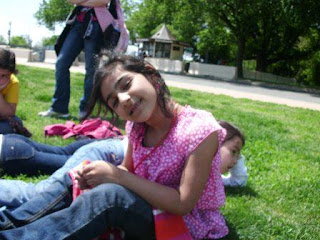 Then we had a few selfies. That is something that was new this year. 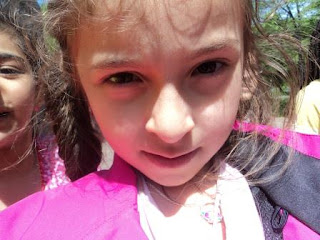 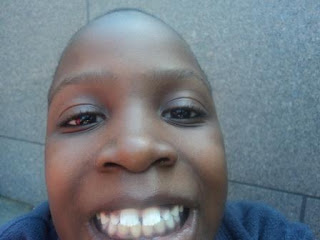 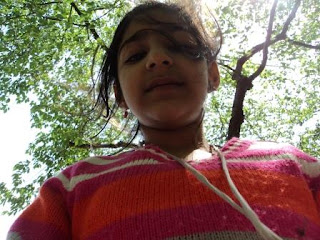 This one struck me as a metaphor for something (not an intentional metaphor on the part of a first grader though - although I could be wrong). 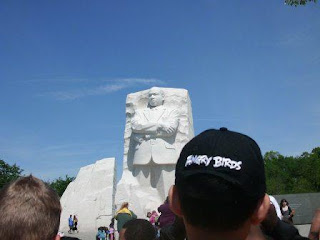 And this one just struck me as sweet. 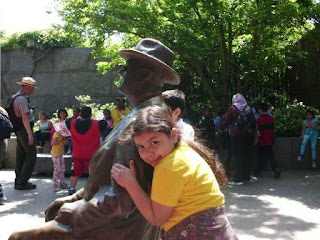 Handing my kids cameras has been one of the greatest things I've done as a teacher.
Posted by Jenny at 9:58 PM 2 comments:

Conversations with various people lately have focused on apathy. Many teachers have complained about how their students aren't focused, working hard, paying attention, caring about what they are learning.

I sympathize. At the same time, I wonder how all these teachers would do in their students' shoes. Would they be focused? Would they work hard? Would they pay attention? Would they care about what they are learning?

A teacher (whom I greatly respect) recently had a talk with a child about effort. Apparently this child had scored lower on a post-assessment than on a pre-assessment. The child's explanation was that she had just guessed on some questions. My impression was that her teacher was frustrated.

So am I. But for a completely different reason. I don't blame this child for lack of effort here. I don't blame all these faceless, nameless students for their apathy.

A significant portion of their time at school is spent taking tests. State-mandated tests. District-mandated tests. Grade-level tests. Classroom tests. I would guess my daughter takes a couple of tests each week, on average. She's nine.

I would stop caring if that were true too. School should be about learning. Instead, it's about testing.


(Tim, a letter is being drafted. My concerns with testing will be shared with many.)


I have little sympathy for educators who complain only to each other about negative effects of testing. Tell the rest of the world!
— Tim Stahmer (@timstahmer) May 9, 2013

More Thoughts Thanks to John Hattie

I'm still working my way through Hattie's book. A conversation with a brilliant colleague today got me thinking about one piece from Hattie.

A powerful strategy (at 0.72 - nearly double the average) is teacher-student relationships. This is not a surprise to me and likely not to anyone else who works with other people. Relationships matter. A lot.

The way my district is interpreting Hattie is moving us away from strong relationships. We're standardizing lessons more and more so that the same thing is happening in every classroom at a grade level. That leaves very little room for getting to know students and for building the rapport that is critical. (I see a lot of other problems but I'll restrain myself for now.)

The conversation with my colleague came out of concerns that we are so focused on content that we are missing the many pieces of teaching that aren't related to content - wait time, talking less while students talk more, deep questioning, building relationships, etc. I hadn't considered this before she brought it up. Now I can't stop thinking about it.
Posted by Jenny at 9:11 PM No comments: