I'm halfway through my first year in first grade. I've said before that it was surprisingly challenging to adjust to the move from fifth grade to first. A lot of it is getting better. The credit for that goes, in great part, to the literacy coach and the special education teacher that I work with. They have been willing to problem solve with me and have been great models for me to watch.

There are so many things that are beginning to feel comfortable. I'm getting the hang of making the content accessible for first graders. I'm beginning to understand how they are learning and how I can help that process. The biggest problem I'm still facing in classroom management. It's painful. For the five or six years prior to this one, classroom management required little thought or effort. It felt natural and I had a huge bag of tricks ready for when things got a little more challenging.

Now, I feel like my responses are all wrong. I'm unable to anticipate quickly enough and head off problems. I haven't figured out how to redirect students in order to help them refocus. And, worst of all, I spend way too much time yelling - not helpful. This is my big goal for 2009. I expected classroom management to be a challenge, but I underestimated how big a challenge.

I'm open to any suggestions of good books, websites, and other resources to help me mull this over.
Posted by Jenny at 8:56 AM 15 comments:

We're Low on His Agenda

Obama has chosen his Secretary of Education, Arne Duncan. In my mind this is a really disappointing choice. He's not Michelle Rhee or Joel Klein, but he isn't that far off either. He's the CEO of the Chicago Public Schools. Schools that, as it has been pointed out, the Obamas did not choose for their children.

This is a choice that means things will not change in education during an Obama administration. I think it shows that education is low on Obama's agenda (something I don't find too surprising given the state of our economy and Iraq and Afghanistan). I don't have to like it however.

I had my reservations about Linda Darling-Hammond because I don't think she would have been revolutionary enough. I would have like to see Deborah Meier in the job, but she's probably smart enough to turn it down if it were offered. At least Darling-Hammond would be walking into the job with some experience in the classroom and in school buildings. As Alfie Kohn said

That is what I had been hoping to see. Instead, we'll spend the next few years fighting for funding in an economic recession while we spend more and more on tests, test preparation, and 'research-based' remediation methods. How sad for our students.
Posted by Jenny at 6:26 AM 2 comments:

I don't mean me cursing, although that does go through my head sometimes.

We've implemented a reward program due to some classroom chaos (due, I'm certain, to my less than impressive classroom management in first grade). Students have been able to earn stickers when they are doing a fabulous job. They've earned a variety of different things (lunch with us, small toys, extra recess). It's worked pretty well. Last week I noticed that one of the stickers we used was probably less than appropriate for first grade. 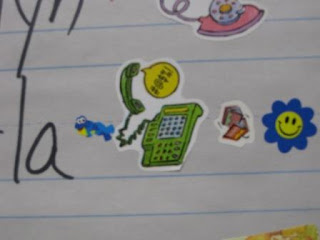 I've written before about a student who fascinates me. On a recent morning I needed to complete a county-wide math assessment on a few students, this one included. I went over to his special spot in the classroom to get him and he was working on this: 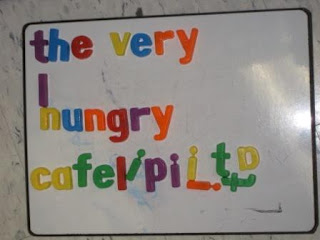 I tried to get him to stop, telling him he could return to it later. He got quite agitated and, after pushing it a bit longer, I stopped to really look at what he was doing. Once I did so I noticed the creativity he was using to make the title of one of his favorite books. I backed off (after taking this picture) and began the math assessment with another student. A few minutes later this little one must have managed to complete this because he joined us to work on math.
Posted by Jenny at 9:23 PM No comments:

I'm not completely naive. I've looked at my students for ten years now and wondered which ones would end up in gangs, pregnant, in jail, etc. I have some clue about the realities of their lives. My first group of fourth graders are 19 now. I think of them as sophomores in college, although that's probably true for only a small percentage of them.

In the past month or so I have learned of the pregnancies of two of my former students. One is a sophomore in high school, the other is a senior. Neither is a shock, but it is still painful. The senior was the one I learned about today. When she was in third grade her mother was pregnant and diagnosed with cancer. Due to the pregnancy there was little they could do. After the baby was born the cancer was so far along there was little hope. She died that year. The father was accused of sexual abuse and the kids were placed in foster care (actually with a staff member at our school who is phenomenal). Near the end of fourth grade, I think, they were placed on a permanent basis with an aunt one county south of us. I was deeply sad to see her leave our school, but thrilled she had found a more stable home.

When my colleague came in today and shared the news I asked her if there was any way to get a letter to this girl. She said that if I could get it to her by 1 today she could pass it on to the girl's aunt. While my first graders did their math centers I sat down to write.

Dear S.,
D. just stopped by my room with a beautiful picture of you in fourth grade. I have, sadly, forgotten the names of many students from the past ten years of teaching but your name has not been lost to me. Your beautiful smile in that picture brought back so many wonderful memories.
She says you are 17 now. I'm sure D. would never lie to me, but it is really hard for me to believe. She also told me about the baby. I have two daughters now; they are 5 and almost 2. I love them more than I can believe possible. I wish you and your little one the very best of luck. You both deserve the most wonderful things this world has to offer.
If there is ever anything I can do to help you, please let me know.

I included my phone numbers and email address. I don't expect to hear from her, but at least it felt like some sort of action on my part.

I'm left wondering what I could and should have done differently for this child. I don't hold myself responsible by any means. I think I am simply looking for some way to control the situation, some way to keep it from happening again. There is little in life that is as depressing as looking at first graders and wondering which ones will become parents long before they are ready.
Posted by Jenny at 10:19 PM 1 comment:

I Have a Granny and a Grandmother

I've been working hard to improve my guided reading lessons with first graders. I still feel like they are sub-par, but they are getting better.

Recently one of the books we were reading had a girl and her grandmother in it. The girl called her grandmother Gran. I wanted to be sure the students were able to read that word because I figured it was not one they would immediately recognize. So I asked the kids what they call their grandmothers. I expected to hear things like 'grandmother', 'grandma', 'gram', 'nana' and such.

The first child says, "Eyfly". I said, "No, not how you go to visit her. What do you call her?" He repeated his answer. I tried again to clarify and finally realized that he calls her that.

The next child says, "Flower" or sometimes we call her "Mentenuga".

At that point I realized that I teach in a very diverse school. (I did already know it, just not as clearly as I did at that moment.) These students do not lead lives similar to mine at that age. I love that about my students. I just need to remember it so that I can build their background knowledge appropriately.
Posted by Jenny at 8:24 AM 1 comment:

This is apropos of nothing on this blog but I just discovered that a former teacher of mine died in July at age 100. Now that I've written the word teacher this line of thinking seems more appropriate here but my interactions with her were far removed from a traditional classroom.

She was Alice Chalifoux. I spent two summers studying with her at the Salzedo Harp Colony in Camden, Maine. By the time I was lucky enough to learn from her she was in her late eighties. The mystique around the harp colony was so great for me before my first trip there that a friend suggested I would be studying with the Yoda of harpists. It was a surprisingly accurate description. She was a tiny woman with an impressive force of personality. I was constantly intimidated by her. In spite of that she pushed me to greater heights as a harpist (which probably helped me reach mediocrity).

This weekend I will play for a Christmas party for the seventh (or so) year. As a result, I've actually been doing some real practicing recently. I think this must be what got me thinking about Alice Chalifoux. The amazing power of the web quickly led me to this video of her on Johnny Carson in 1988.

I can't begin to do her justice in this brief post. She was the principal harpist in Cleveland long before women played in orchestras. She taught at three different schools in Cleveland and ran the harp colony each summer up into her late eighties. She was the grand dame of the harp world, something she probably found amusing. The harp is known as a sedate, elegant, classy instrument. Alice could be all of those things, but none would be her natural state. She was strong, outspoken, witty, and often off-color. The harp world will shine less brightly without her.
Posted by Jenny at 9:02 PM No comments:

Reason 835 Why I Love My School

These signs hang outside our bathrooms. 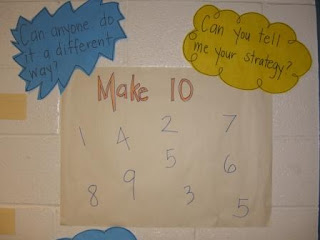 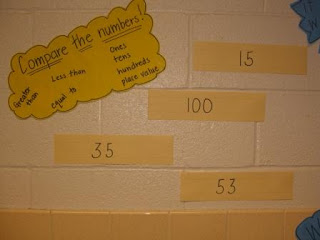 Our fantastic math specialists put these up for teachers to use as their students take bathroom breaks. 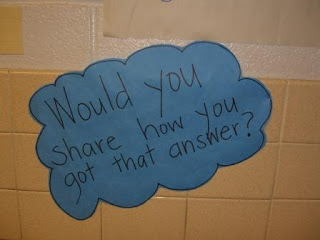 I've played various games with my students during bathroom breaks for years, but this is much better! They've changed the signs over time so that new ideas and activities are available. To me, this just illustrates the attitude at our school that the students belong to ALL of us. We are all working to provide them every opportunity to succeed.
Posted by Jenny at 9:20 AM 2 comments:

One of my most fascinating students this year created this. 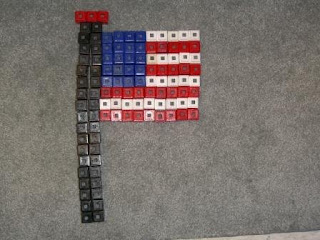 He has a special spot in the classroom. It's a secluded area between my teacher cabinet and the back of a bookshelf. I had not intended for it to be used for anything - I was just trying to minimize the space around the teacher cabinet. However, it has been perfect for him. When things begin to overwhelm him he can head to that area. We have left a variety of math manipulatives there for him; pattern blocks, unifix cubes, pentominoes, etc. He has created some astounding patterns and designs with these manipulatives. This flag was one of my favorite of his creations.
Posted by Jenny at 9:04 PM No comments: