We're halfway through the first quarter! Last week was the fifth week of school for us so my class did five Top 5 lists to celebrate Week 5 in Grade 5. I had the students brainstorm their own thoughts for the list over the past weekend. We collected one item for each list per student and then voted. I was alternately impressed, surprised, and disturbed by their choices. I'd never done this before, but I'll be doing it again for the fascinating insights into their thinking. One of my goals was to have our top 5 lists be more than simply lists of favorites. Here are the lists:

Top 5 Authors that Move Us
(I haven't read anything by #3, #4, or #5. Again, I think I better get with it. I love Sharon Creech. Good for these kids for recognizing her genius.)

Top 5 Famous Virginians
(We study Virginia history in fourth grade so I figured my students would have lots of ideas here. Mostly they did, but I had to nix Abe Lincoln, Ulysses S. Grant, and Helen Keller. I let Harriet Tubman in, although calling her a Virginian is a serious stretch. And really, Stonewall Jackson is number two on their list? And William Henry Harrison makes the list at all? Are they crazy? No George Washington, James Madison, George Mason, Maggie Lena Walker, Arthur Ashe, Robert E Lee - even Harry F Byrd, Sr would make more sense to me. Oh well. I blame their fourth grade teacher.) 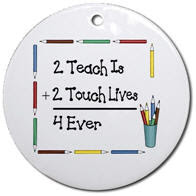 (Here, and on the science list, they were hindered by not really knowing what to think of the title of the list. I decided not to elaborate, but to let them take it where they would. Challenge 24 is a math game that they love. #3 fascinates them because of the play between numbers and words. #4 is just lame.)

Top 5 Biggest Science Ahas!(We are studying light right now so I'm not surprised to see it. Weather and the solar system are studied in fourth grade. I'm not sure where atoms came from, but it is the mascot for their high school - unusual I know.)

I'd love to see what other classes come up with. Then maybe I could determine if my kids are as strange as they seem or more like fifth graders everywhere.

You could also blame that crazy bird fourth grade teacher for the amount of fantasy on their author and book lists.

Hey, thanks for the link. I'll get you taken care of over at my place. Speaking of fantasy authors, I see that Madeleine L'Engle just died this last week. How sad! Her writing shaped much of what I read in my growing up years.