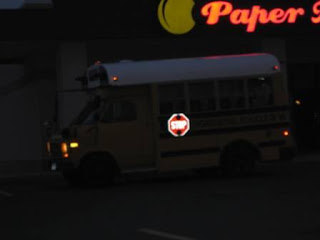 s picture was taken on the way to school about a month ago. We pass this strip club everyday. In the afternoon (even as early as 4:30) the parking lot is full and the bouncers are out. In the morning it's just another spot in a quiet strip mall.

However, on several mornings over the past few months this bus has been there. It's from an elite private school. One morning there was a BMW there as well and it appeared that a child was moving from the car to the bus.

Wouldn't one expect a family that drives a BMW and sends their offspring to elite private schools to have a better plan than meeting the bus in a strip club parking lot? There's a bank just two doors down.
Posted by Jenny at 2:14 PM

Perhaps the owner is the one sending his/her child to the elite private school? Or maybe one of the dancers? Oi vey.

It used to be called something-or-other Steak House though it was still a strip club. I know people who didn't realize that it was a, well, steak house, and who took their kids there to eat. (They had hasty departures after they opened the door.) We can only hope that these people are likewise ignorant of the fact that it is a strip club. jan

I've been driving past this spot for years and I remember when it was a steak place. I had NO idea that was really a strip club. We could easily have been those parents hastily ushering our girls away. Ugh.

Oops. I meant to say that people didn't realize it was a strip club. jan

Wow. As it turns out, common sense is not so common....

Quick update, in the past week or so I've noticed the bus has moved to waiting in the KFC parking lot next door.