I've got a little darling this year who has trouble controlling her anger. She couldn't be any cuter than she is. She also has amazingly strong emotions. One strategy we're trying with her is a notebook. She is a bright, bright girl and capable of doing a lot of writing in the beginning of first grade. 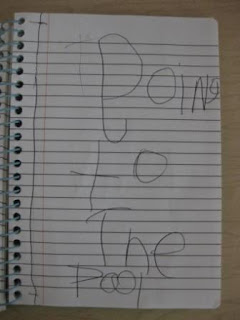 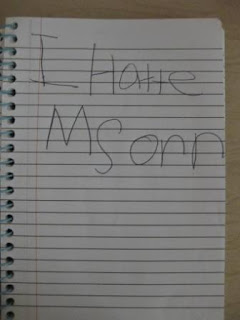 On other occasions she clearly wrote when she was angry. I think this third one says, "Ms. Orr is stupid." 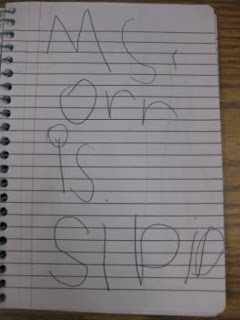 It's the final note here that made my afternoon today. I love the idea of a six-year-old writing a "note to self," especially about the progress of her day. I'm also quite impressed by the idea that she can recognize when things are going downhill.

It's not clear to me yet if this notebook is helping or not. We started it on Monday and this week has definitely been better than last week. We'll see how things continue. 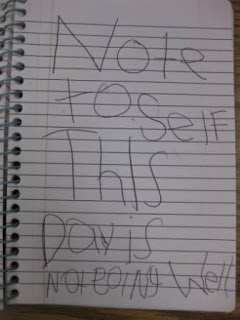 (She does not attempt to keep this notebook private; she shares with countless people regularly. Today, she left it out in the midst of everything at the end of the day. I suggested she put it back in the home she chose for it but she declined, several times.)
Posted by Jenny at 9:09 PM

oh wow! haha! I have a child with anger control issues as well. He normally kicks things.

I gave a notebook to one of my kids with some other issues to write in and she seems to be doing well with it. Hopefully it'll help.

Isn't it interesting to read what they write sometimes??
~Maggie

I need to remember to write these kinds of "note to self" things when things are going well!

I just have to tell you how much I appreciate you as a teacher and enjoy reading your blog. I have a son in first grade this year. He is in a very strict environment, and I don't think that his teacher believes in modifications to meet the needs of individual learners. I have thought for a while that a journal would be SO helpful for him, as one of his problems is his excessive talking. I think that if he could write in the journal instead and know that someone (or everyone!) would read it and respond, I think it might help redirect. I am planning to suggest this and a few other ideas....but I don't know how receptive she will be to the suggestion. Anyway, it really made me smile to see the journal pages, especially the "note to self."

That note to self is hilarious! haha So cute.

Kid writing is hilarious! Only ni first grade... Love the idea of an anger notebook.