The Case of the Feisty First Grader Continued

Yesterday I posted about the beginning of my intersession class.

Once we started getting the hang of what makes a mystery, we got to move on to some really fun stuff. We spent one day looking at secret codes. We read The Mystery of King Karfu which includes a secret code. I stopped at the first spot with code and had them decode it (I had made copies for them). Then we continued reading. At the end there's another section with code that I had them solve. It was great because it's a recipe (it says to mash the grapes and spread on bread, mash the peanuts and spread on bread, fold and eat) and the kids had to figure out what it would make. We did a couple of other activities with secret codes, one requiring addition and subtraction and one I created with wingdings. The kids could then write their own secret messages to one another. I would like to have done something with disappearing ink, just using lemon juice and such, but I'm afraid to get involved in using an iron to make it show up. If anyone has a safe, easy way to make it show up, I'd love to know.

The next day we studied fingerprinting. We read The Great Paper Caper, in which the bear's paw print identifies him as the culprit. Then we took our own fingerprints, using ink pads. 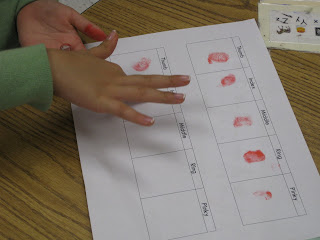 The best part of the day was dusting for fingerprints. I had tried it before class and not been able to make it work. The kids (and eventually me) were able to make it happen! 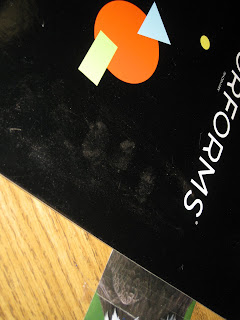 The last activity we did was to create paintings with our fingerprints, Ed Emberly style.

On another day we looked at wanted posters. We read and The Secret of the Circle-K Cave and Chicken Little by Steven Kellogg. I know it's not a mystery, but it has a great wanted poster in it. We looked at a bunch of historic wanted posters so that we could brainstorm a list of the sorts of things one finds on a wanted poster (picture, reward, crime, name, etc.). Then we brainstormed a list of possible first grade 'crimes'. I didn't want any killing on these posters! I took a picture of each child and they created their own wanted poster. It might have been their favorite activity all week.

If I get to teach this class again I'd like to spend one day looking at handwriting, but I couldn't find a good mystery for it yet. I also want to do something with puzzles of various sorts. As usual my ideas all come together in the midst of things rather than ahead of time!
Posted by Jenny at 9:00 AM

Do you think a hairdryer on "hot" setting would work instead of the iron??

The activity can make the children quick, clever, and acute in understand,I think. :)
I am a Chinese student.Reading your blog ,I find the education has very big differences between China and your country .But they all have strongpoint.
sorry,my English is very well,maybe the sentences have some faults,forgive me!:)

Not sure about the disappearing ink, but if you write on white paper with a white crayon, you can paint with watercolors over the message and it will show up (the wax resists the paint). Sort of the same idea...