The Case of the Feisty First Grader

That's the name of my intersession class for this two weeks. (See bottom of post for explanation of intersession if you are unfamiliar with it.)

We're reading lots of mysteries and doing some really fun activities with them. We started the two weeks just looking at the different components of a mystery; detective, setting, clues, crime, victim, suspects, solution, etc. We read several different mysteries and the kids painted these different parts. 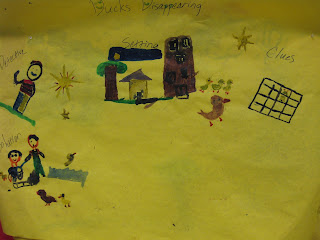 We spent a few days just reading lots of mysteries and identifying the different parts. We read Ducks Disappearing which was great because it's not a typical mystery story. It's about a little boy who notices some ducklings disappearing at a hotel and he solves the mystery. We also read Helpful Betty Solves a Mystery and had some great discussions about whether or not Betty was a detective, whether or not she was helpful, and whether or not she actually solved a mystery. We also read a High-Rise Private Eyes mystery, because those are my personal favorites.

After that we started working on observing. During our morning meeting time we played the game in which one student leaves the room, another student leads some movements (clapping, snapping, tapping legs, etc.) and the first student has to figure out who the leader is. Another game we played was to have one student leave the room and change one thing (untie a shoe, turn a shirt around). Upon return the kids had to figure out what had changed. We also had a guest come in for a couple of minutes just to say hello. After he left the kids drew him (I took a picture so we could compare). We read Cam Jansen mysteries while we talked about observing.

The other observing activities we did included having students build something with pattern blocks, show a partner, cover it up, and have their partner try to recreate it. I also put out a tray of small items (paper clip, pencil, block, etc.) then took one thing away and they had to identify what was missing.

During this time of observing we kept talking about the parts of a mystery in the stories we were reading.

I'll share more about the rest of the class soon. It's been a blast.


My school is on a 'modified calendar' year. We start in late July, rather than in early September. We take breaks after each quarter, in October, January, and March. During those times we offer an optional intersession. Students can come and take two classes (one morning and one afternoon) that are a lot of fun. We have cooking, tennis, scrapbooking, art, author studies, music, etc. sorts of classes. We can teach for extra money or we hire 'outsiders' - retired teachers, interested community members, and such.
Posted by Jenny at 7:49 AM