High and Low of the Day

I tried to tackle too much today. It's only the second week of school with first graders, I should know better. I was trying to have several things going on at once and it got a bit out of hand. I stopped the class and sent them back to the carpet to reevaluate. One little girl refused to cooperate. We've run into this more than once in the past week but we've been able to make things work so far. Today, not so much.

I gave her a couple of options, finally told her I would count to 3 and she needed to be doing her job as a first grader or take a break across the hall in a kindergarten classroom. She didn't want to pick either choice. After counting to 3 I took her hand to head across the hall. She wouldn't go. I quickly decided that I couldn't get into this power struggle right then and picked her up and took her across the hall.

It didn't even take the entire walk across the hall for me to recognize that I had not handled this well. Her behavior wasn't really any different from what we'd seen so far, but I was so frazzled by the other things going on that I didn't have the wherewithal to work this out with her.

When I returned to get her after about 2 minutes I sat down with her in the hall. I told her how much I like her and how high my hopes are for her. I don't know if what I said mattered because her teary, hesitant response was, "So you're not going to call my mom." I reassured her that I had no intention of calling her mom, that I wanted the two of us to come up with a plan for a good year. I hope I figure out how to make that happen!

Ugh, I hate when I realize that the issue was me, not the student.

On the positive side, I sewed a skirt for my tall table and I'm so excited by it! You can see the 'before' picture here. 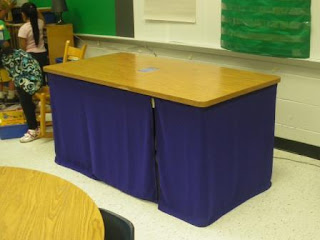