In thinking about our focus for writing my co-teachers and I decided to look at sentences. This is a surprisingly difficult concept for first graders.

We decided to tackle the idea through the patterns of thinking. Yesterday we talked about identity/other, what is a sentence and what is not a sentence. It was a pretty basic discussion. The most interesting piece of it, in my mind, came when one student said that one word is not a sentence. We put in a thinkblock, charted it, and moved on. A minute or two later another student took us back to that, saying, "I think one word can be a sentence. Sometimes we just say hi." So we added a thinkblock to what is a sentence and added the idea that one word could be a sentence to our chart.

Today we discussed the parts of a sentence. 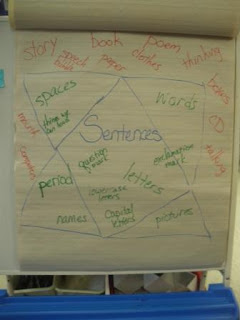 (In the picture I was trying to draw a thinkblock to include the parts we were putting in our actual thinkblock. I'm not an artist.)

The students came up with the things we would have expected: periods, words, letters, question marks, etc. They also mentioned spaces, an idea that is still challenging to some first graders and one that had not occurred to me. The idea that pictures can be a part of sentences was mentioned in reference to books for young children that often use pictures for some of the more difficult words (think Highlights magazine).

Finally, we talked about what sentences can be a part of. This is always a bit of a challenge at first. But, pretty quickly, students began spouting ideas: books, stories, poems, paper, speech bubbles, etc. The surprise for me was a student saying boxes. When I asked him to tell me more, he pointed at a box with instructions on the side. I was thrilled. If my students begin noticing sentences everywhere then we are making good progress! They also mentioned the idea that sentences are a part of talking. Success!

Tomorrow we will discuss how sentences are related to other things. I'm always a bit hesitant to tackle this pattern because it's not as easy for me to see. This could be fabulous or it could crash and burn, we'll see.

I have thoughts about TEDxNYED but not enough time to put them into any meaningful order. Maybe this weekend I'll manage it.
Posted by Jenny at 7:56 PM

What a great lesson! I am sure that it helped many of the kids consolidate their ideas and thinking. Thanks for sharing.

Yes! Sentences are a serious challenge... especially when their little minds really aren't ready for such an abstract concept.

Love the idea of the Thinkblock!

Good luck with the next lesson, and let us know how it goes!!!

Sounds like they are connecting some of the dots! Great job capturing their thoughts in a more visual format.

This is very cool. Thank you for the link to Pattern Thinking.

When I was getting my masters in creative writing, we'd sit around in graduate seminars and talk about the anatomy of a good sentence. It's a deep topic that holds challenges even for adults. Three cheers for your 1st graders who are cracking into it!

I am looking forward to what comes next in these lessons. I'm very interested in the shifts you see your kids making. I tried a mini unit on sentences in 2nd and 3rd grade. Working with a sentence as a unit of meaning made me think more about how kids get meaning from a sentence. I'd love to see where student thinking is in 1st as I think more about this for next year. Keep us posted.

It's been fascinating to watch the kids interact with text as readers and writers since these lessons. We're not all sentence experts, by any means, but students are trying out punctuation in new ways and taking risks. It's exciting.