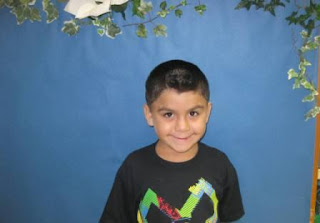 Teachers shouldn't have favorites. I deal with that issue by having my favorite munchkin change every day. Lately, this little guy has been topping that list quite frequently though.
Last week he was telling me a story (I don't remember the gist of it). It started with, "My family is from Spanish..." At the end, I asked about this. He repeated that they are from Spanish. I pushed a bit more, asking what country they are from. "Spanish," he said again, with a hint of annoyance and sense that I might not be that smart. So I dropped it.*
His smile is almost constant and he has questions and interest in everything. Nate is unfailingly polite, kind, and generous to everyone.
He's been struggling a bit in his reading group (they're reading far beyond where we expect first graders to be at the moment) so my wonderful co-teacher mentioned this to me. I immediately said that he should join my guided reading group because it will be a better fit for him**. I think it will be but I have to admit that I mostly said it because it will be such fun to meet with him everyday.
Our astoundingly brilliant librarian noted to me the other day that Nate wears skinny jeans everyday. She was wondering where one might find skinny jeans for a six-year-old boy. I have no idea but she's totally right. I hadn't even noticed it. I'm too busy look at this kid's smile and sparkling eyes.
*His family is from Argentina. I learned that from his kindergarten teacher because he will either say Spanish or that he can't remember.
**Nate comes from both the Nate the Great books by Marjorie Weinman Sharmat and the comic strip Big Nate.
Posted by Jenny at 9:34 PM

Nate overheard me having a conversation with one of our teachers one morning. The teacher said, "I'm proud to be 40 and look this good in skinny jeans."
Nate was behind us in the hallway and promptly said, "look, I have skinny jeans just like you."
Not only does he wear them- he wears them with pride.

organized chaos, that boy does everything with pride. It's one of the greatest things about him.

Sadly, he's one of our munchkins we'll lose next year to the redistricting.

I'm so sad to not be teaching this fellow this year. I had him in kindergarten and absolutely fell in love!