Some fabulous bloggers organized a 10 for 10 nonfiction event. Picking my 10 favorite nonfiction books was a challenge. Partly because I struggled to define nonfiction. I decided not to include poetry or folk tales, even though those show up in the nonfiction section of the library. I stuck with a more traditional idea of nonfiction books. Even then it was tough to narrow it down. Once I decided each book had to be by a different author it got easier! Otherwise you might see 10 Steve Jenkins' books here. 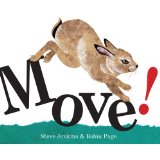 I absolutely adore all of Steve Jenkins' books. I have read at least a dozen of them to my class this year and not been disappointed once. (I call them Steve Jenkins' books but many of them are written by his wife, Robin Page, and illustrated by him. I do not give her enough credit.) Move! is my favorite though. I love all the verbs describing how different animals move and we return to this book and move in those ways around our classroom when we need to get some wiggles out. 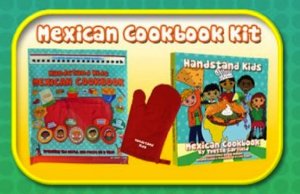 There are a few different books in this cookbook series, the Mexican cookbook, Chinese cookbook, and Italian cookbook, at least. We bought these for our oldest daughter, starting when she was about 7 and wanted to be cooking. They are easy to follow and we have found the recipes to be delicious. There are also tidbits about the different cultures in each cookbook which add a bit of fun.

Knucklehead: Tall Tales and Almost True Stories of Growing Up by Jon Scieszka 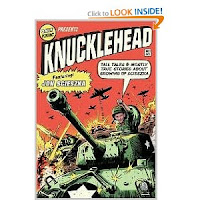 This one isn't really for my students (first graders) but is fabulous for those a little older. It is absolutely hilarious and a book that upper elementary students will quickly identify with. According to one of my colleagues, the audio book is read by the author. We've read this one at home but I think we may have to check out the audio book just to hear it in his voice. Scieszka also read one chapter of this book to President Bush and his wife when Scieszka was named the first National Ambassador for Young People's Literature. I love that this is what he chose to read. 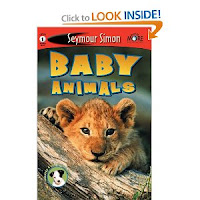 I am not as big of a Seymour Simon fan as I once was, but his See More Readers series is one I love. The photographs, typical of Simon, are stunning. The way this series is laid out works for me better than his traditional books. There are now quite a few books in this series, about all kinds of topics including animals, space, machines...Still, Baby Animals remains my favorite.


An Egg is Quiet by Dianna Hutts Aston, illustrated by Sylvia Long 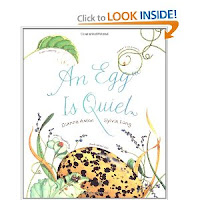 This one has been out for a while now and I still return to it often. The pale colors and gentle illustrations are just right for this. The book offers a lot of information, but can be read without getting into all of the details. Sometimes we read everything and sometimes we just read the basics. It gets kids thinking about something as simple as an egg in new ways which helps them look at other things in new ways. 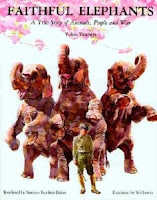 This is another one that isn't appropriate for my first graders. I loved using this book when I taught fourth and fifth grades. It is such a sad story but is so well written it offers myriad possibilities for discussions and questions. It's a book that sticks with you long after you finish (clearly it has stuck with me because I haven't read it in more than four years).

Me ... Jane by Patrick McDonnell 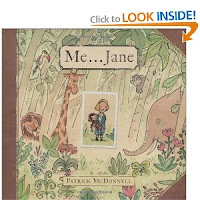 Patrick McDonnell also wrote the wonderful, wordless picture book South which I use at the start of every year. He is able to tell stories in such a welcoming way. His illustrations, so similar to those of his comic strip Mutts draw you in as well. This biography of Jane Goodall is an amazing text to use with young children. So many biographies written for young children are stilted and dull. This definitely is not.


Just One Bite by Lola Schaefer, illustrated by Geoff Waring 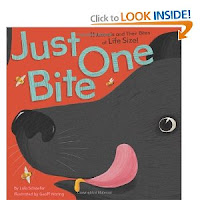 This book always reminds me of Steve Jenkins' books. In fact, every time I see it in the library I think it is one of his. It's big, which helps with a read aloud, and it's about animals and food. Kids find parts of it gross but that's never a bad thing with young kids. The grossness just makes it that much more interesting.

Wax to Crayons by Inez Snyder 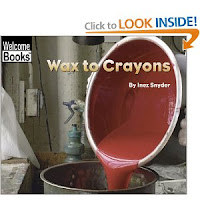 We spend a lot of time in first grade wondering about things, anything. We wonder about things outside our window, on our wonder table, at recess, or in our classroom. I love books that offer us answers to our wonders while giving us even more to wonder about. Crayons are such a common item that kids are usually fascinated to see how complex they can be.


Why Do Snakes Hiss? and Other Questions about Snakes, Lizards, and Turtles by Joan Holub 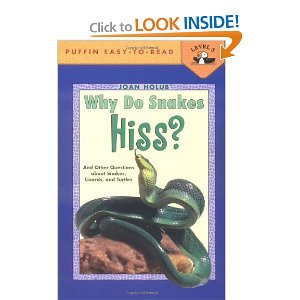 We ask a lot of questions when we wonder so a book like this is a great mentor text for us as writers. Seeing how an author takes a question and writes about the answer helps us. Plus, these questions are ones that fascinate my students. So they love it as readers and writers.

All images from amazon.com.
Posted by Jenny at 6:29 AM

I also noted your Unicorns vs. Zombies. Can you comment on that book? Thinking about the high school crowd???

Yes, Jenkins is a master creator. I love Move! It gets the kids to really think what could be the next verb. I will have to check out Just One Bite. As for Faithful Elephants, I sobbed the first time I read it, what a sad story.

I cannot wait to check out the crayon book. I had one like it when I taught fifth grade, but this one looks way better.

I also had an Aston and Long book on my NF10for10 list too.

Jen,
What a terrific list! You have so many great titles here. I didn't think to consider Me....Jane.

I read Steve Jenkins' book, Time to Eat, today. I'm thinking I should try to follow in with Just One Bite. Sounds like the perfect follow-up.

I'm so glad you joined the event, Jen.

I love how you connected some of your titles to first grade wonders! I've added some titles to my shopping cart thanks to your suggestions.

Julie, Unicorns vs. Zombies was not one I ever thought would be good for my class, but I had hoped to share it with my daughters. Nope. I am loving it however! It would be great at high school.

elsie, I love seeing how many lists have Jenkins' books on them. Clearly we all love him.

Stacey, I'm reassured when I find shared titles on lists. It saves me money!

Cathy, Thanks for getting this going. I have no problem finding good picture books, but nonfiction is always a bit more challenging. I've already ordered 5 books and I have lots more lists to go through.

Laura, I can only imagine what this is costing us all! Totally worth it though.

Faithful Elephants is one of my favorites from when I taught fourth grade...pair it with the novel Elephant in the Garden and you have a perfect pair! Thanks for sharing!

Jen~
Great list, I have added MANY to my listmanina list and my library book bag!
I am especially looking forward to From Wax to Crayons, this is such an obivious (and overlooked) wonder in the first grade classroom!
Deb

Love the list! I can tell you that it's totally worth it to get the audio version of Knucklehead! It's one of my faves!! Enjoy!