I did* a sprint triathlon this weekend. 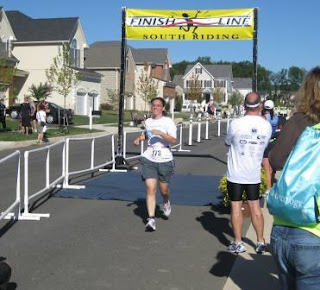 These races give me a lot of time to think as I swim, bike and run. It takes me about an hour and 45 minutes to complete a sprint triathlon. Often as I am in the midst of a race I remember a speaker I heard at a literacy conference several years ago. She was talking about having students write poetry and that people often think it isn't such a great idea because kids write such terrible poetry. She showed a picture of her husband at a triathlon and asked, "What do you call the person who comes in last in a triathlon?" A triathlete.

Anyway, I often think about this as I plod my way through a race. This time it got me thinking about how I define myself. The order is mostly random and not meant to suggest priority.


A large part of my mulling over this during the race was thinking about how much effort I put into each of the above. I work at being a mother and a teacher - reflecting, reading, talking to others. I could certainly work harder, but I put in a reasonable effort. That's not so true as a triathlete and it shows. There was a period in my life when I put in that kind of effort as a musician but not now.

The question this raises for me is where to set the bar. Do I work to put more effort into the areas that I feel I'm falling down in? Doing so would require letting other areas drop a bit. Or do I accept the level of effort that exists now? That feels like lowering the bar which sounds bad to me. But is it?


Oddly enough, I'm also a bit fascinated by the things that aren't on the above list. Things I would expect to be how I define myself but don't seem to be.


*I've never been able to come up with the right verb for this. Run isn't appropriate because I also biked and swam. Competed might work for some folks but is not the right term for what I do in a triathlon. Any thoughts?
Posted by Jenny at 8:38 PM

My sister-in-law just did a triathlon, and was worried about whether she'd finish. So 'finished' or 'completed' is what comes to mind for me.

Congrats on another triathlon! I think you have captured the ever existing struggle for a thoughtful person in this modern age when we don't sped all our time looking for food:). We have desires and dreams and responsibilities and have to make choices on how to prioritize them. Of course we all lower the bar on some things and raise it for others. I don't think anyone should feel bad about letting some things take a lower priority in life as long as the person and those they care about are understanding and supportive.

I too agree that it's a simple matter of priorities. We spend more time and energy on things that are of a higher priority to us. This is good or else I would have a ridiculously clean house but wouldn't be nearly as fulfilled because I wouldn't be spending time with kids. To some a clean house is a priority and that's fine, but to me it's just not. Nothing would ever get cured or discovered or anything if those people didn't make that a priority in life.

Sue, finished or completed sound pretty darn good, given that's my goal! This is my fourth season doing these and I'm still grateful just to finish them.

Emet, possibly if I spent some time living somewhere less 'first world' than the DC area I would not feel such guilt or be so torn. That's worth remembering.

Anonymous, I completely agree! When my oldest daughter was born my mother told me that if she could go back and do things again she would spend less time worrying about her house when my sister and I were young. I've managed to not repeat that mistake!

Wow congratulations on the triathlon. I am impressed. I like this post a lot but it is so late and I'm so tired I don't think I can leave a coherent comment about this idea of personal definitions. I guess they change over time which is at it should be, and we all have a finite amount of time to devote to things in our lives. Someone was telling me today about ironing sheets and underwear. I can tell you that is one task I will never spend any time doing.

Andrea, I don't iron anything! I don't even like to own things that have to go to the dry cleaners. I guess I make priority choices I don't even realize.