I learned from my good friend, Science Goddess, that today is International Rock Flipping Day. She clearly had a good time with it!
Due to the astounding amounts of rain we had here over the last week my girls and I had just been down to the creek that runs right behind our house on Friday. It was gushing then. Now it's back to being a gentle flow already. We did notice there were a bunch of rocks so it seemed like the prefect spot for our adventures today. 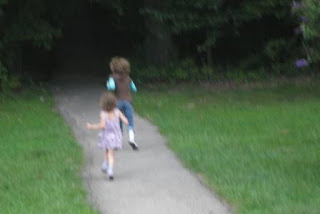 I told the girls about the day and that we were going down to the creek to flip some rocks. They were thrilled. Clearly they are as geeky as their parents. 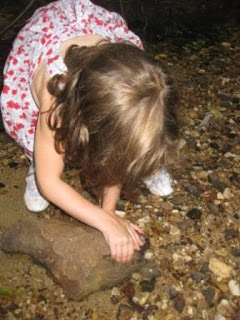 Neither one was a bit bothered by getting wet, muddy, or slimy. The little one is constantly in a dress and I was a bit concerned. But due to her four-year-old lack of coordination she got the wettest and dirtiest and was never bothered a bit. She also attempted to flip many rocks that were bigger than her head. She's determined. 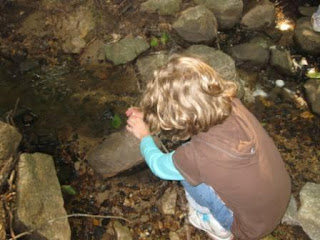 The older one was exceptionally eager. Typical to her, she headed off, flipped rock after rock and plowed on. I'm sure we missed many fun little critters because she doesn't slow down a bit! 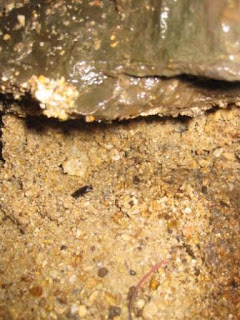 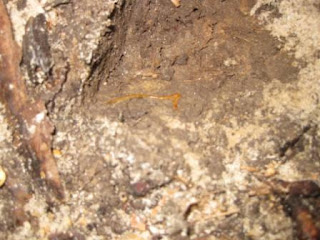 We found a few worm-like creatures and a beetle.
Aside from getting an average of three mosquito bites per minute of our adventure it was fabulous. By the way, those bug bites are not spread out among the three of us. Apparently I am the tastiest one in the bunch.
There is a wonderful flickr group for International Rock Flipping Day as well.
Posted by Jenny at 4:56 PM

Looks like you all had a fabulous time! Always a fun community science event. Glad you joined us this year. :)

oooh - my boys are going to be so angry that I didn't know about this day.
Don't let them know...I will have to keep an eye out for it next year.

Oh so much fun and discovery to be had. I wish we'd known.

It sounds like y'all had a lot of fun flipping rocks. We did, too!

Teachermum and Frau M., while the official day has passed I would guess it's never a bad time to take kids out to flip rocks! I know my girls will be doing it on their own a lot more now.

Science Goddess and Susan T., I love seeing all the flickr pictures and reading others' accounts. I'm so glad you both enjoyed this fun too.